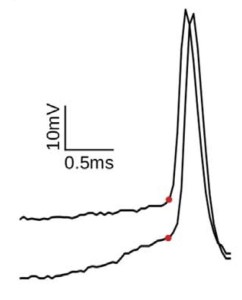 An often neglected aspect of spike initiation is that spike threshold is not a fixed quantity, but varies on short and long timescales. On short timescales, we found using biophysical models that most data could be explained by the inactivation of Na channels, possibly in conjunction with the subthreshold opening of K channels, and we proposed a threshold equation that predicts the value of spike threshold as a function of biophysical properties (Platkiewicz & Brette 2010). Functionally, it implies that the threshold adapts to the membrane potential, which enhances the neuron’s coincidence detection properties. We introduced the concept of the « effective postsynaptic potential » (difference between PSP and threshold) to understand the integrative properties with an adaptive threshold, such as enhanced coincidence detection (Platkiewicz & Brette 2011). The threshold equation, initially derived in single-compartment models, was amended to take into account axonal spike initiation (Brette 2013; 2015).

We are now testing our experimental predictions in collaboration with Dominique Debanne, and looking into other mechanisms of threshold modulation (such as non-sodium axonal channels).