The SpyKING CIRCUS is a python code allowing fast spike sorting of large multi channel recordings. It is inspired from the following publication, but not exactly similar. Performance, speed and robustness of the previously described algorithm have been improved, and details can be found in the following preprint, on BioRxiv . It has been tested on datasets coming from the retina with MEA, cortical datasets from V1, but also recordings from hippocampus with tetrodes. To be more precise, the algorithm is a greedy template-matching algorithm, able to use multi CPU and GPU in order to run (almost) in real time for up to 252 channels, and its scaling should be straightforward for higher number of channels (it has been tested with 4225 channels).

The software can be decomposed into four main steps, as shown in the next Figure. An automated whitening, clustering, and a fitting step. Then, a final manual stage has to be performed in order to review and quantify the results of the algorithm. 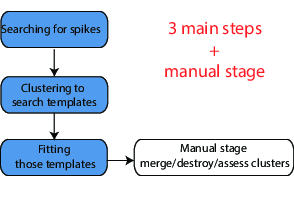 The final stage is currently performed with a MATLAB GUI where people can see the templates that have been detected, superimposed to raw data, and the raster plot of the spike times at which those templates have been fitted, with a corresponding amplitude. 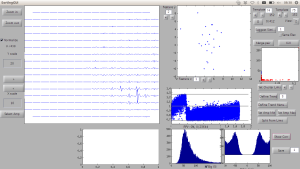 To know more about the algorithm, you can read the documentation, or even download it!