We are interested in understanding how sensory systems work in ecological environments, taking the example of sound localization. Many psychological and physiological studies consider idealized settings for technical and experimental reasons, but the real challenge of the auditory system is to localize sounds in complex environments. We are focusing on binaural cues, which are interaural time differences (ITD) and interaural intensity or level differences (ILD).

The first part of our work is to characterize the structure of ecological environments. One complex aspect of binaural hearing is that there is a head between the ears: the head diffracts sounds and makes binaural cues depend on frequency in a complex but deterministic way. We have started by quantifiying this property with binaural recordings on humans and on stuffed animals lended by the Museum of Natural History (it is important that the animals are still and have a natural posture). The animal is placed in an anechoic chamber (at IRCAM) with binaural mics in its ears, and sounds are played from speakers at different positions.

Even in anechoic chambers, reflections can remain in low frequency. Therefore as a control we developed a method to calculate acoustical directional filters from photos of the animal (Rébillat et al. 2014). A 3D model is calculated from photos, then the acoustical wave equation is simulated on the model. Additionally, the posture of the model can be changed.

We found that binaural cues, including ITD, varies very significantly with frequency and with posture (Bénichoux et al. 2015). In another theoretical study, we showed that early reflections (eg on the ground) produce interferences that produces large changes in binaural cues (Gourévitch & Brette 2012).

In this direction, our current interest is to quantify binaural cues in more natural settings, in echoic environments and with actual sounds sources (which can have a directivity and a width). Our technical setup is similar, but in addition we have built an electronic system to measure and record the positions of both the source and the listener and their distance. Our goal is then to relate the distributions of binaural cues in natural environments with psychophysical data on sound localization. 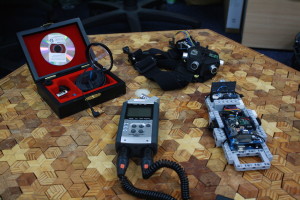 With our experimental collaborator Philip Joris,we have then showed that the the frequency dependence of ITD, measured in acoustics, matches the frequency dependence of the preferred ITD of binaural neurons (measured electrophysiologically) (Bénichoux et al. 2015). This suggests that binaural neurons are tuned to acoustical features of ecological environments, rather than to fixed interaural delays, and we proposed that this is achieved by a combination of cochlear disparity (binaural neurons receiving inputs from mismatches places on the two cochleae) and axonal delay mismatches.

First, we have shown that standard models, in particular the popular theory that sound location is encoded only by the average activity of binaural neurons in each hemisphere, are unable to account for behavioral performance in sound localization, unless environments are extremely simple (Goodman, Bénichoux & Brette 2013). The main reason is that those models are not robust to non-spatial aspects of sounds (Brette 2010).

Instead, our theory is based on the idea that perceptual properties correspond to temporal invariants in the sensory flow, which constitute a (partial) model of the sound object (for example the invariant left signal = right signal for a sound source in front of the listener). These temporal invariants are then reflected in the relations between the timings of spikes, i.e., in specific neural synchrony. This is part of a more general theoretical proposition, according to which “synchrony receptive fields” represent temporal sensory invariants (Brette 2012a). We first developed a proof-of-concept spiking neural model based on this idea, which can estimate in the presence of diffraction, as measured acoustically (Goodman & Brette, 2010a; 2010b). The model has the property that binaural neurons are tuned to frequency-dependent ITD.

We are now investigating a more physiological model in which binaural neurons detect coincidences between auditory nerve fibers originated from mismatched places on the two cochleae, in combination with axonal delay mismatches, where the adequate wiring emerges through activity-dependent plasticity. A first step towards this goal is a phenomenological spiking model of spherical bushy cells (monaural neurons) fitted to in vivo responses to sounds across different levels (Fontaine et al. 2013), based on a level-invariant spiking model (Brette 2012b).

On the practical side, to design auditory models, we developed an auditory toolbox for the Brian simulator (Fontaine et al. 2011) (see also the page on simulation).